In July 2016 a new office skyscraper was made available for use in the capital of Poland. The Q22 is a pointing building with glass façades made of PRESS GLASS IGUs. Over 25,000 m² of IGUs of our production were used to complete the project. The façade construction involved a breakthrough technology while innovative photovoltaic systems were used on the roof.

The skyscraper is located in the centre of Warsaw, in the area of the former Fryderyk Chopin hotel. In 2011 the hotel was closed down and then dismantled. It is worth highlighting that all materials were recycled. Construction of the new facility started in June 2013.

A Polish design studio Kuryłowicz & Associates was in charge of the skyscraper design. The acquired concept combines elements typical of constructivism and neomodernism. The Q22 stands out with its pointing construction and a glass façade constructed by means of innovative technologies.

The name of the building, which stands for quality and quartz, best reflects the nature of the skyscraper. The building structure has a very high level of energy efficiency, which was possible owing to the applied glazing and photovoltaic panels. It is confirmed by the BREEAM Interim Excellent certificate granted to the facility.

The construction lasted for three years, with ECHO INVESTMENT being the main investor. The completed building has the height of 195 m and the total area amounts to over 91,000 m². The major part of the space is intended for offices. Moreover, there are 5 underground levels and 320 parking spaces. The skyscraper was made available for use in July 2016.

The glass façade was the key element of completing the building. DEFOR became the main contractor and was implementing the project in close cooperation with our company.

The initial concept included a segmented façade with aluminium strips  visible on the outside and a separated floor strips. But the Investor wanted to get a visual effect resembling a quartz crystal.

”We took the challenge and in cooperation with architects we proposed a solution that has never been used before, anywhere in the world – a segmented structural double-glazed façade with a glass pane to the full height of a storey, with no visual separation of the floor strip. The design required close cooperation with the Construction Engineering Institute as well as suppliers, including glassworks and glass fabricators”, says Piotr Węglewski, DEFOR’s Commercial Director.

Double-glazed units with 0.5 W/m²K factors and the greatest dimensions reaching 4740 x 2540 mm were used to complete the investment. Selective solar control coatings of the 70/41 type and Thermofloat thermal insulation coatings were used with the IGUs. The coatings were applied to the base glass with reduced iron content and then tempered and laminated.

We supplied different IGUs, varying for construction, dimensions, weight, details of making the IGUs and special quality requirements for the needs of the investment. There was a special demand to produce tempered glass with strictly determined local bow.

According to Piotr Węglewski the issue of ensuring efficient and timely deliveries was a great challenge related to the investment. The daily demand covered 200 m² of glass packages containing 4 tempered glass panes with HST certificate, and the largest packages weighed over a ton. However, the assembly took only 9 months.

”The result we managed to achieve in Q22 lived up to 100% of the Investor’s expectations concerning technical and visual parameters. It needs to be emphasised that implementation of such an undertaking entails cooperation with reliable and trustworthy partners so we are very happy to have DEFOR complete the project with PRESS GLASS”, adds DEFOR’s Commercial Director. 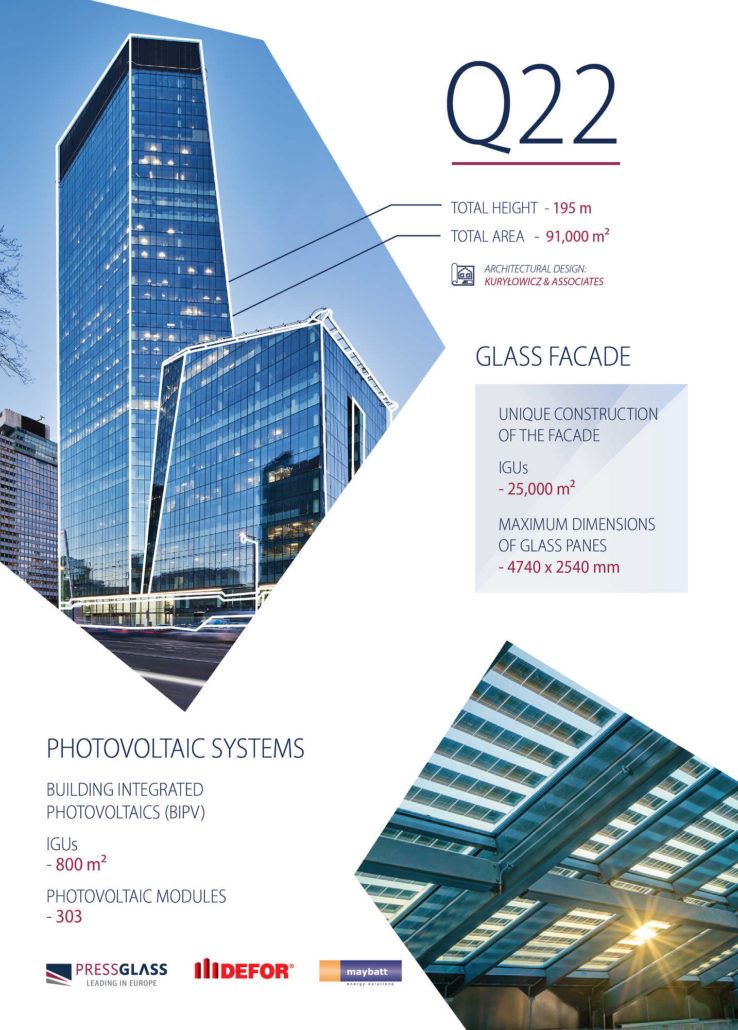 Photovoltaics on a large scale

Special modules from MAYBATT using the Building Integrated Photovoltaics (BIPV) technology were installed on the roof. The concept behind the solution is that traditional elements of a building, a part of the roof in this case – are integrated with photovoltaic panels.

We supplied 70 mm thick glass panes with different dimensions for the investment. Double-glazed IGUs containing laminates with PV elements, composed of tempered glass, which was HST tested, were used in the building construction.

It is worth to mention that the Q22 building is the first Polish office skyscraper of such a size and in which photovoltaic glass was applied on such a scale.

The oblique roof has an aluminium framework with a post-and-beam construction. Bartłomiej Zysiński, President of the Board in MAYBATT points out that double-layer photovoltaic modules of the ”light through” type are embedded in the outer part of the glass construction of the roof. MAYBATT applied the modules to tempered single glass panes supplied, which were then returned to us to make laminated glass panes and combined them into double-glazed IGUs with photovoltaic modules.

”The photovoltaic modules were designed according to the façade architecture design; they come in 45 different types and are based on monocrystalline cells. Each PV module consists of a tempered glass pane in the top and bottom part. Between the glass panes there is PVB foil and PV cells with internal connections and junction boxes”, Bartłomiej Zysiński explains.

The President of the Board at MAYBATT also highlights that photovoltaic systems (total of 303 modules), which are an integral part of the Q22 roof, have several functions. The functions include thermal insulation owing to two argon-filled chambers and two relevant coatings, which help to obtain the heat-transfer coefficient of 0.6 W/m²K for glass panes oriented in an oblique manner. The glass panes also provide protection against solar radiation, which is possible owing to selective solar control coating of 70/41 type, permitting up to 70 per cent of solar radiation and reducing heat radiation penetration up to 41 per cent. The systems can also be used to generate electricity for heating the roof.

As a result, the whole project is somehow unique because the modules installed by MAYBATT allow the use of photovoltaics – through PV elements in the outer laminate – as a source of heat. The solution facilitates heating and hence removing of snow in case of heavy snowfall.

The total of 800 m² of glass panes were used for completing the photovoltaic systems on the roof of the Q22. 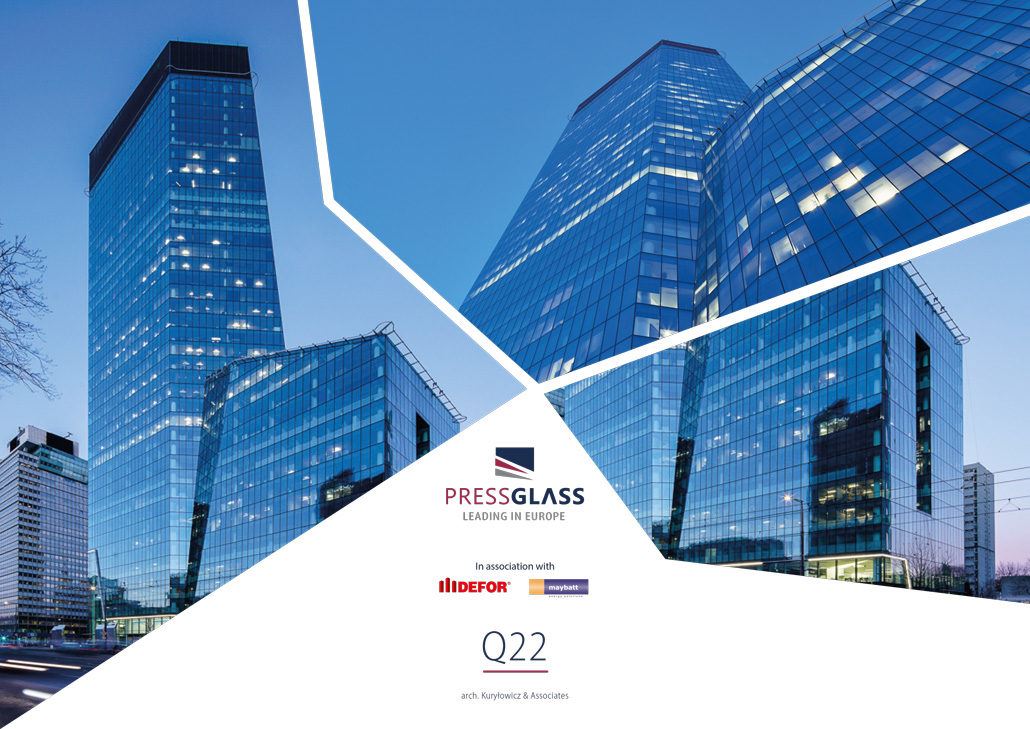