Over 100 years of history of the Royal Papworth Hospital (Cambridge, UK) has been crowned with the construction of a modern Cambridge Biomedical Campus – a research centre that has the ambition to become one of the world’s leading scientific and healthcare centres. For the needs of glazing on this campus, PRESS GLASS supplied a total of 9,500 sq m of insulated glass.

The new Royal Papworth Hospital with a usable area of 40,000 sq m was designed by a HOK architectural studio, in London. The campus takes into account the scientific and medical functionality of the facility. The first two floors of the building form a square with an elliptical end – here are located offices, an outpatient wing and operating theatres. Rooms for patients are located on the upper floors of the building on an ellipse plan with an internal courtyard. This pioneering structure of the building together with substantial facade glazing provides a natural source of light. Press Glass delivered approximately 2,500 sq m of insulated solar control glass and 7,000 sq m of enamelled tempered glass with the HST test accordance and frames glued with structural silicone, which were installed as glass facade panels in a ventilated facade system.

The building, located in Cambridge in a picturesque park scenery, attracts attention also with its friendly interior atmosphere. Two central atria of the building allow deep natural lighting of corridors. At the main entrance to the hospital, a huge illumination in the form of glazing with digital printing awaits patients and medical staff. The graphic applied to the glass is not accidental – it is the work of a recognised artist, Adam Ball, who was appointed a consultant at the HOK architectural studio.

The graphic entitled « Until the day you feel good » was inspired by the work of surgeons – irregular lines are mapping of surgical scalpel cuts. This unusual digital print on glass was made at the PRESS GLASS plant. How the print was created? Watch video on https://vimeo.com/347028779 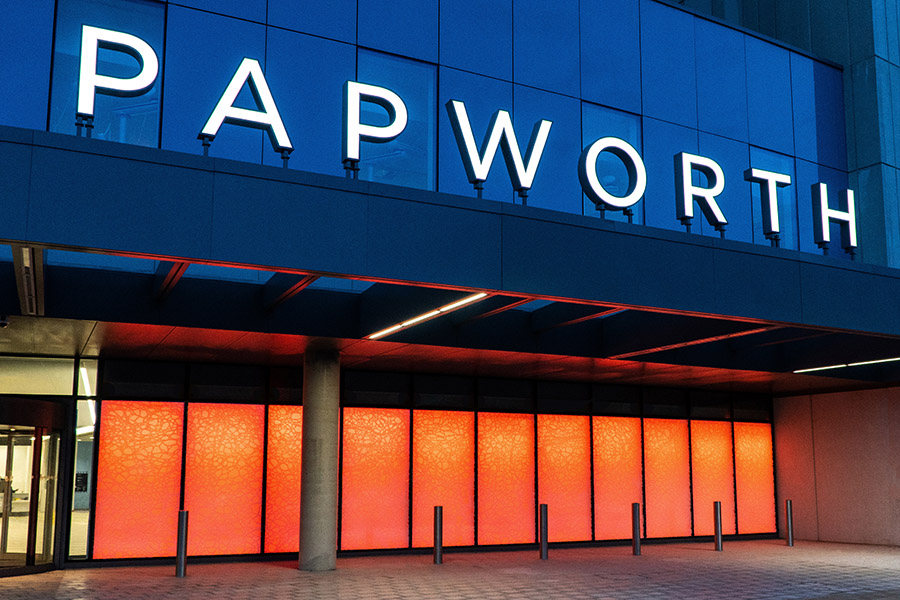 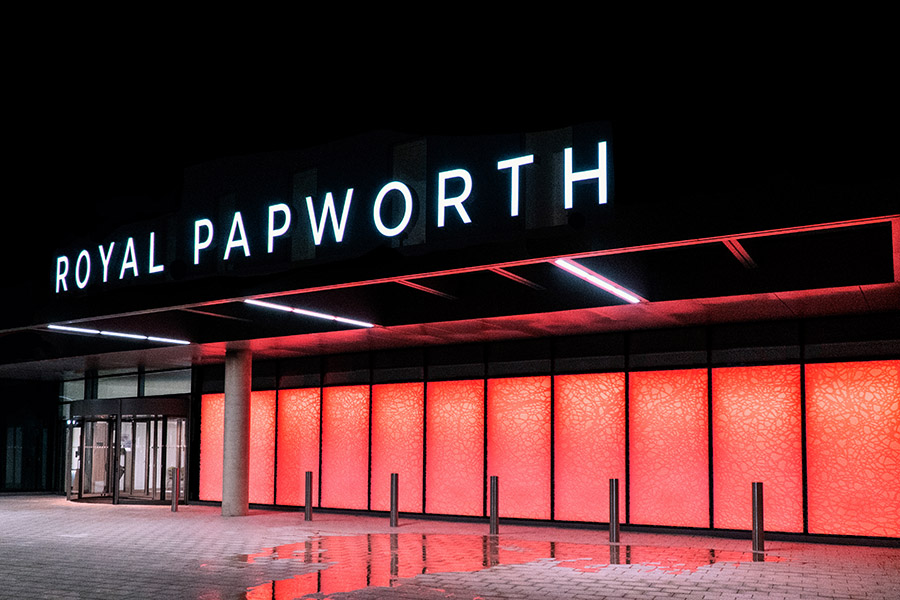 The illuminated 3×16 meter installation aims at lifting people’s mood regardless of the season of the year – hence the idea for the changing LED light to communicate an additional artistic message. Thus, light in shades of yellow and orange warms the winter months, while cool, calming and relaxing blues and greens are chosen in the summer.

The campus was put into service in May 2019. The official opening of the campus together with the unveiling of a commemorative plaque by Her Majesty The Queen Elizabeth II took place on July 9, 2019.

In 2017, the hospital received the royal title from Her Majesty the Queen and became the Royal Papworth Hospital NHS Foundation Trust. In 2018, the hospital celebrated its 100th anniversary.

In May 2019, the hospital has moved to a completely new, modern building on the Cambridge Biomedical Campus.

The Story Behind HOK’s Design of Royal Papworth Hospital: https://www.youtube.com/watch?v=02AhevOa2Zs

The « Run and Support » team for the fifth time ran for the charges of institutions...