The summary of the whole 2018 could be defined in one sentence: ‘we ran, supported and we were breaking records’. Under this slogan, there is not only a record amount that PRESS GLASS employees ran together for charity, but also the number of individual achievements and places on the podium during sport competitions. The ‘ran’ amount of nearly PLN 63,000 proves that 2018 was filled to the brim with commitment to help the needy! It’s time to sum up all sports events in the past year.

GROUP RUNS – A NEW PLACE ON THE GROUP RACE MAP

In 2018, apart of the races in Częstochowa, Radomsko, Tychy, Tczew and the Croatian Varaždin, PRESS GLASS employees participated for the first time in the race in Nowogard. The choice of place was not accidental. Another PRESS GLASS production plant has been built in the vicinity of Nowogard. The principle for selecting places for group runs is the location of the sporting event in the place, where the company facilities are located.

The participation of PRESS GLASS employees in all group runs resulted in the amount of over PLN 25,000, which increased the accounts of local public benefit organizations and supported the purchase of medical equipment for the charges of the social assistance centre in Nowogard.

WE ARE REACHING HIGHER AND HIGHER – INDIVIDUAL STARTS

The sport struggles as part of individual starts last year recorded a record amount of almost PLN 33,000. 55 employees of PRESS GLASS, who in total overcome 6,600 km, made this achievement. Employees of the company have participated in over 280 sports events in 109 Polish cities. Individual starts as part of the Run and Support campaign have crossed the Polish border – in 2018, we recorded the first foreign participation in the marathon since the beginning of the campaign’s history, The start took place in the historic place – Athens, and Sebastian Zimny from our branch in Tczew took part in the race. 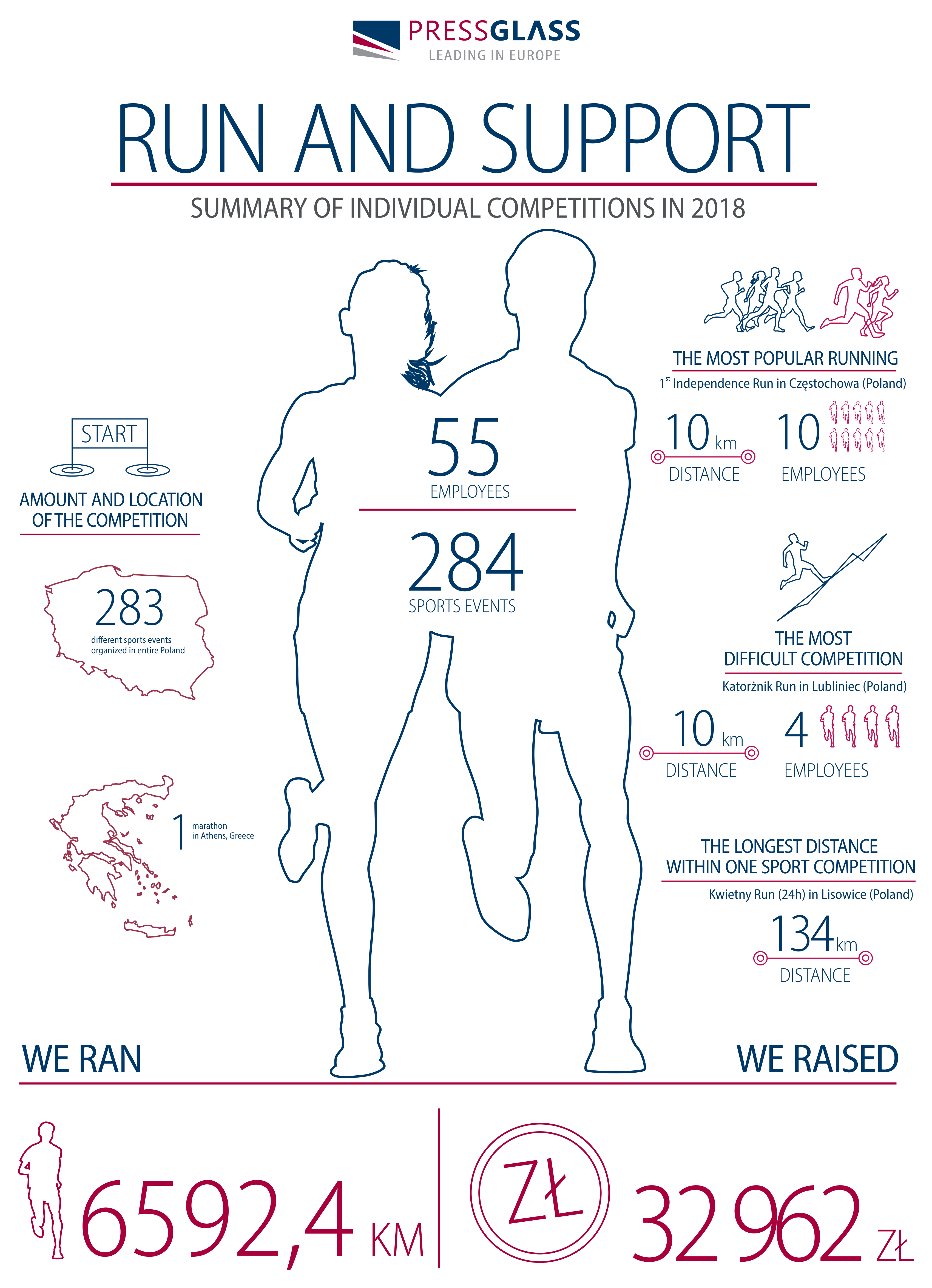 Statistics from individual runs show a significant increase in interest in the campaign – this has attracted many new faces and has inspired the sporting spirit of competition into many people. It is worth noting that several employees of PRESS GLASS achieved individual successes, while standing on the highest levels of the podium, including Justyna Barczyk-Strama, Patryk Sowiński, Andrzej Potoczek, Marcin Zubert, Grzegorz Kruk, Marcin Fronczak, Michał Maciejewski, Jacek Piętak, Kamil Derlaga, Tomasz Jamski and Sebastian Zimny. Last year, Grzegorz Kruk covered the most kilometres – over 823. Sebastian Zimny noted the biggest turnout in the competition – he participated under the colours of our initiative 67 times. The longest distance within one sport competition was covered by Grzegorz Kruk – 134 km during the “Bieg Kwietny” (“Kwietny Run”) in Lisowice (Śląskie Voivodeship).

The money ‘from individual starts’ was donated to the 21 charges of the Foundations: “Zdążyć z Pomocą” (Help on time), “Iskierka” (Sparkle), “Kawałek Nieba” (Piece of Heaven), “Słoneczko” (Sunshine), “Wcześniak” (Preemie), “Nasze Dzieci” (Our Children), “Avalon” and charges of the Polskie Towarzystwo Walki z Mukowiscydozą (Polish Society for Fighting with Cystic Fibrosis); and the Fundacja “Cała Naprzód” (Full Ahead Fondation). In some part, money from individual starts was also distributed among charities located near PRESS GLASS plants, such as, among others: Fundacja Przyjazna Planeta (Friendly Planet Foundation) from Radomsko, Hospicjum “Świetlikowo”  ( “Świetlikowo” Hospice) from Tychy, Stowarzyszenie na Rzecz Szkolnictwa Specjalnego (Association for Special Education) in Tczew and Fundacja Mozaika (Mosaic Foundation) from Częstochowa.

“ZIELONA STREFA RELAKSU” (‘GREEN RELAXATION AREA’) with the support of the Run and Support team!

Between March 19 and 23 this year. PRESS GLASS employees, along with people associated with the Special Institutions Unit in Tczew, took part in a charity relay race around the Kociewie and Kaszuby areas. The goal of the run was to create a Green Relaxation Area – a place of safe rest that will allow the mentally challenging charges to relax and calm down. Money ‘ran’ by the Run and Support team’in the amount of PLN 830, supported this initiative.

Last year, during the 11th Bicycle Ride in Tczew, employees of PRESS GLASS together with their families jointly inaugurated the “Sport and Support” campaign. As this year’s statistics show, the campaign is spreading more and more – nearly 70 people in the colours of the “Sport and Support” took part in the 11th Bicycle Ride in Tczew this year, which translated into an amount of almost PLN 3,500. The money was transferred to two seriously and chronically ill people living in the vicinity of Tczew.

The Run and Support campaign was inaugurated in 2015 with a group start during the 7th Częstochowa Run. This year, we will meet on the line of the Częstochowa Run for the fifth time. Such small anniversaries are worth celebrating. This year’s 11th Częstochowa Run will be an opportunity to accentuate our campaign even more both on the start line as well as on the route. We want to gather a record number of team members this year, hence the 100 People at the start and Power Gate campaign. We encourage all interested in participating in this year’s edition of the Częstochowa Run to follow the information on our PRESS GLASS Run and Support group of runners on Facebook and contact directly the Promotion Department in Nowa Wieś.

What will 2019 and next years bring? We only know that we want to help even more! Thank you for your all sporting achievements! We keep our fingers crossed for your next starts and successes. See you at the competition!

Thank you for visiting us during the BAU 2019 fair!

Cookies are small text files placed on the user’s computer or mobile device, which enable interface customisation of your web browser and provide better functioning of our website.

To ensure proper functioning of our website via strictly necessary cookies, the data stored in our systems is anonymised and it does not involve processing of any personal data.

Our website may also install other cookies, but only with your consent. You can revoke your consent any time without any consequences for browsing our website.