We are proud to announce that our employees have just completed another successful year of the PRESS GLASS “Run and Support” campaign. It was a significant year – the campaign expanded to raise money for charity in individual races. In addition, it went beyond Polish borders and for the first time, Polish employees could run together with PRESS GLASS d.o.o. staff in Croatia. What was our race schedule? How much did we manage to raise for charity? It is time we summed up all of our last year’s races.

We started the running season in April with a group run in the 8th Częstochowa 10K Run. The team consisted of 60 people and the money we raised (almost PLN 6,400) was donated to three children in need – Emilek Koryczan, Michał Bajerski and Olek Sukiennik.

Two months later, 19 PRESS GLASS employees took part in the 4th Radomsko Street Run. Despite the heat, all managed to finish the 10K run and the money we raised (PLN 950) was donated to the “Koniczynka” Association of Parents and Guardians of the Disabled in Radomsko.

Since groups of employees take part in runs organised near the locations of our facilities, we could not have missed the runs in Tychy, Tczew and Varaždin.

In September, we participated in two group runs in Tychy. 14 PRESS GLASS employees took part in two races: the 5th Half Marathon (21 kilometres) and the 21st International Street Race (10 kilometres). In total, we managed to raise PLN 1,540, which was donated for the treatment of Miłosz Kleinschmidt.

September was also marked by a breakthrough in the “Run and Support” group races. Together with PRESS GLASS d.o.o. employees in Croatia, the PRESS GLASS team ran a half marathon and a 5K run in Varaždin. The joint Polish and Croatian race attracted 61 employees and turned out to be very successful – we collected HRK 20,400 (approx. PLN 11,800), which we donated to the Croatian POGLED Association for children with autism.

Helping others can be contagious and – what is most important – it knows no boundaries. The joint Polish and Croatian race in Varaždin increased the appetite of our Croatian team for helping others. In October, 10 PRESS GLASS d.o.o. employees took part in two individual races in Zagreb: a 5K run and a marathon. The money they raised (HRK 2,130) was donated to Jan Ciapek, struggling with acute lymphoblastic leukaemia. The group races ended in November with the 10K Sambor Street Run in Tczew. Our team consisted of 39 runners and raised PLN 2,730. The money was donated to the Tczew Special Education Facilities. In November, we also took part in a special group race for Franek Szewczyk in Słowik. The 5K run, with some unusual rules, was completed by 6 PRESS GLASS employees. The money raised (PLN 420) was donated for the treatment of Franek, the son of one of our employees.

All “Run and Support” group races raised a total of approx. PLN 25,000, which was given to charity.

Our race calendar was also full of additional individual runs. We wanted to help even more – and taking part in group races was not enough for PRESS GLASS employees. That is why in May, we added individual runs to the “Run and Support” campaign. Throughout the year, 27 employees participated in 41 races organised at 34 locations all over Poland. In total, they covered 1,330 kilometres and raised PLN 4,275. We donated the funds to 4 charitable organisations: 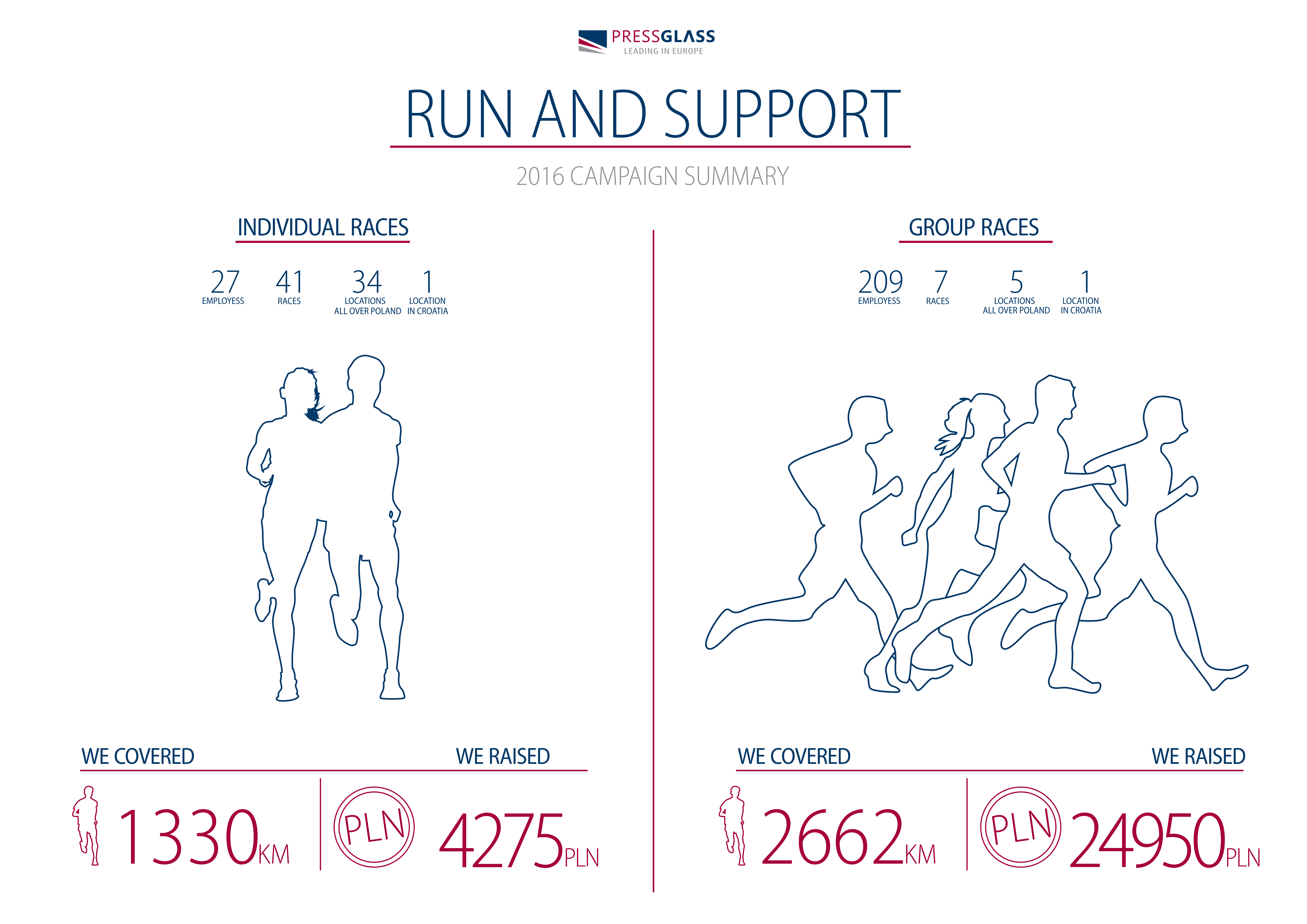 One of our PRESS GLASS employees, Grzegorz Kruk, was particularly active in promoting the “Run and Support” campaign during his races. He completed 14 individual runs, covering over 215 kilometres and raising a total of PLN 675!

To sum it up, in all group and individual races, we managed to collect approx. PLN 30,000. All of the money raised was donated to charity.

Whether we ran in Poland or abroad, we were motivated and happy to help others – regardless of the weather. We covered long and short distances as proud representatives of the “Run and Support” campaign. Thank you for your participation in the PRESS GLASS employee project. Your involvement turned into real help for those facing challenges in life.